Despenser Family Tree – Origins to Hugh the Elder and Children

At last, here it is – after a week or so of frustration, headaches and crossed eyes – the Despenser Family Tree – as complete as possible and as correct as possible (allowing for discrepancies in the records of course, and any silly mistakes of my own!). 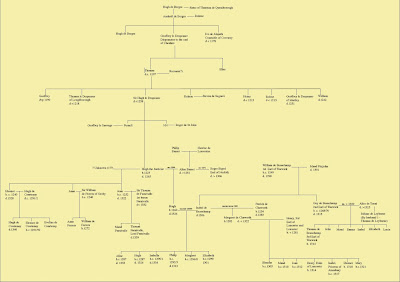 Yes, it does look tiny, I admit. But if you double click on the image, it should bring a larger version up on your screen. It is still hard to read (sorry!) but it’s the best I can do with the limitations of Blogger. The original was an A3 size, so it was inevitable that quality was going to suffer a bit to get it on here. Still, hopefully – and maybe with the aid of a magnifying glass – you will be able to see it! Once I get the website up, I shall try and upload a more reader-friendly version.

The information comes from a number of sources – all of which I feel are reliable, given that the researchers I’ve used often go back to primary sources for their info. Much of the work on the earlier Despensers can be credited to a brilliant genealogy researcher named John P. Ravilous, but mention must also be made of other giants of genealogical research on the GEN-MEDIEVAL newsgroup including Douglas Richardson, Leo van de Pas, Brad Verity, Tim Powys-Lybbe, Cristopher Nash and D. Spencer-Hines (the list is too long to include everyone so apologies to any I’ve left out). Also, I’ve used Kathryn Warner’s tentative datings for the dates of birth of Hugh the elder’s children. I have great faith in these people’s research so any glaring errors on the chart are, most likely, mine and mine alone!

The chart itself, is, as far as I know the only one in this format tracing the Despenser genealogy. If anyone wants to use it, you’re welcome, but please ask first and credit me too (see copyright notice above). One more thing: I have stopped the lines of descent at Hugh the younger and have purposely not put his, or his siblings’ marriages and children in. This is because, for a start, I didn’t have room, and secondly, because I shall construct a new chart for those details!

There may be things on this chart that are different to stuff on other genealogy sites on the net. For example, many genealogies contain a Thurstan le Despenser – but I’ve not seen any evidence that connects such a person with a direct line of descent to Hugh the younger. On the other hand links can be made between the individuals shown on this chart from such documents as charters, close rolls etc. The problem, I think, is that the title of ‘Dispenser’ or ‘Dispensator’ as it was correctly called, was quite common (being an office similar to a steward), so quite a few individuals ended up with it as a name. Therefore, the trick is, to find the right Dispensator line, which is what Mr Ravilious seems to have done.

The other oddity that anyone with any knowledge of Despenser ancestry might note is that of the children of Hugh the Justiciar (died 1265). Most books and historians claim that his one son (Hugh the elder – father of Hugh the younger) and all three daughters were from one wife, Aline Basset. However, on closer examination it appears that certainly two, and maybe three of the girls were born before he married Aline in 1260 (it is hard to pin down their exact birth dates but they are certainly earlier than 1260). Also, he was in his late thirties when he married Aline – quite a late age for a first marriage. According to Susan Higginbotham in an article called ‘Hugh the Justiciar‘, “in 1238, the king had permitted him to marry as his friends thought best”. Therefore it seems very likely that Hugh had already been married and probably widowed before 1260; it would just be nice to have the actual primary documentary evidence to say so.

The interesting thing about this chart is that it clearly shows the familial relationships between the Despensers and other families – such as the Beauchamps of Warwick. Understanding these is important when it comes to the study of support for the Despensers and the crown (or not) throughout the period 1318-1326, as well as distributions of grants and favours during that time.

As always, new bits of information are always coming to the surface, so this chart may need updating from time to time Also if any human errors – (most probably mine!) are picked up then they will need correcting. If you have any new additions or corrections (that can be backed up by documentary evidence) then please, please, get in touch.

Sources: As above in the text.