Unfortunately, we know next to nothing of Hugh the younger’s childhood. We don’t even know when or where he was born, although we can make educated guesses. In fact much of this article is a speculation on Hugh’s position could have expected growing up in a noble household from other accounts at the time.

First of all – when was he born? Hugh was Hugh the elder’s first-born son but was probably not the eldest child. This was most likely a daughter –Aline. We can guess this because her marriage was arranged in 1302, four years before Hugh’s, so it is more than likely that she was older than him. Tentatively Hugh could have been born anytime between her birth (which was probably around 1287/88 (Hugh the Elder married Isabel de Beauchamp in 1286/87) and 1290/91 when the next daughter, Isabella, was born. It therefore makes sense to place his birth in 1288/89.

Where he was born is even more of a problem. Hugh the Elder had inherited many estates from his father around the country and particularly in the Midlands. Loughborough is often mentioned as his main manor but there is another possibility that many have overlooked. Records also show another place called Beaumanor (or Beau Manoir) close by where Hugh the elder preferred to live when he was in that part of the country. Manorial records for the time still exist and one dating from about 1277/78 states:

“Within a moated enclosure of considerable dimensions, surrounded by a thick hedge or stockade, stood a hall, a great chamber each of stone, with slate roofs, an inner chamber, and a Knight’s chamber (where Sir Hugh Despenser the Son slept)”.

The ‘son’ was probably Hugh the elder, judging by the date, but it does suggest, that if it was such a favoured manor, subsequent Mrs Despensers may have gone there for their lying-in.

Once he was born, Hugh would have been given a nurse to look after him and up until the age of about seven he would have stayed with his mother’s household having early lessons in Latin and French and basic numeracy. He would also have learned some manners essential to being around well-bred lords and ladies.

The true education of a nobleman’s son started around the age of seven when they were sent to live in another household – usually of a relative. Given the options, the most preferable (and most likely) place for Hugh to have been sent was with his uncle, the Earl of Warwick. Hugh certainly seemed to have some loyalty towards Warwick in his youth and his brother too, was for a time declared as Warwick’s heir. Another option is that Hugh was attached to the royal household in some way – especially as his father held favour with both the king and his son. 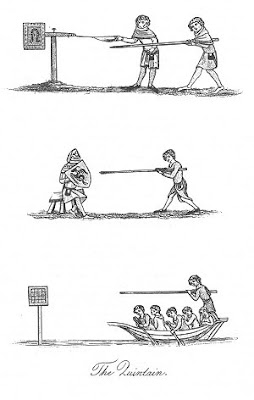 At this point Hugh would have become a page to his new Lord’s household and would have been expected, in addition to further lessons, to perform menial chores, such as carrying water and waiting on tables. He would have slept in a room with the other pages and, like them, have started the serious physical training that was to prepare them fortheir later life as a knight. Games such as fighting with wooden swords on piggyback, wrestling and drills on pells (wooden poles placed upright in the ground) with wasters (wooden swords) and archery would have been an everyday practice.

They would also practiced horsemanship on small ponies although they would not have been expected yet to wield weapons on horseback. The nearest they came at this age was to sit astride a wooden horse while it was pulled along by two other pages. The one on horseback would then learn the technique of ‘couching’ a lance (holding it steady under the arm) whilst aiming at a target.
The polishing of Hugh’s (and the other pages’) gentlemanly manners would have been supervised by the lady of the house. Serving at the table was a very formal duty which had to be done correctly. He would also have been taught to dance and maybe even to sing or recite poetry: being a nobleman was not just about knowing how to throw a sword around. A tutor would be appointed who was responsible for the boys’ further education in Latin, household accounts, religious texts, as well as battle tactics and the occasional story from the Arthurian legends or Greek myth. In other words everything Hugh and the other boys learned was aimed at moulding the perfect ideal of a knight and noble lord.

At around the age of fourteen, Hugh would have become a squire attached to a particular knight, maybe even his uncle (if he hadn’t been already). His tasks now included cleaning his lord’s armour and looking after his horses. By now Hugh’s serious training for battle would have begun. He would have practiced in the tiltyard with a lance, running at a quintain (which would have knocked him off his horse if he’d got it wrong), and one-on-one combat with quarterstaffs and wooden (or bone) swords and other weapons. Despite the weaponry not being made of steel injuries would still have been common and the competition between squires to outdo each other was fierce. Being a squire also meant that, if required, Hugh would have had to follow his lord to war and be part of his retinue. However, on a more cheery note, he would also have followed him to tournaments.

Squire-hood also presumed other responsibilities. The young men were supposed to look to their faith and pray regularly, as well as learn the chivalric code – not just as it applied to them but also to issues of battle, such as ransoms and truces. Hugh would have been expected to be courteous around the ladies, well behaved and well groomed.

At the end of his training – usually at about 18 or 19 – if the squire had proved himself well enough, he would be made up to a knight by his lord – or, if he was lucky, by a higher power, such as the king. In Hugh’s case, he was knighted at about 17 or 18 at the Feast of the Swans by the Prince of Wales, Edward of Caernarvon. 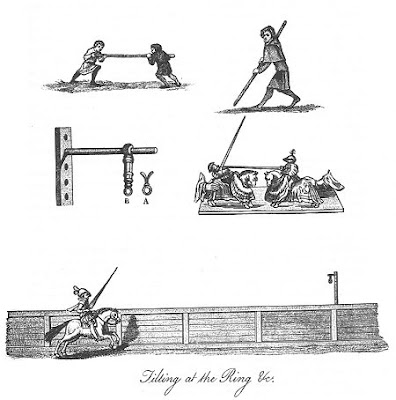 With elevation to knighthood came a privileged status, but not always great wealth. Some knights stayed within their lord’s retinue. Others returned to their family lands and served the king from there. Once again we do not know where Hugh went or what he did (other than marry Eleanor de Clare) after his knighting. His father had given him barely enough land to live on – despite his own great bounty of estates, so times must have been hard. Doubtless though he would have kept up his training for he could be called upon at any time to serve in Edward’s wars – a duty he performed in the years to come – especially at Bannockburn in 1314.

However in the end Hugh was to be known (for the wrong reasons) for his administrative and judicial skills than for any knightly feats of derring-do on the battlefield. That is not to say that he wasn’t capable of bravery on the field – just that either he didn’t get the chance or we haven’t heard about it. I often wonder whether he looked upon such men as his mortal enemy Mortimer and envied them their soldierly reputation. Even if he did I’m sure the acquiring of a few more lands here and there brought him more comfort than being able to brag of a few battle scars.