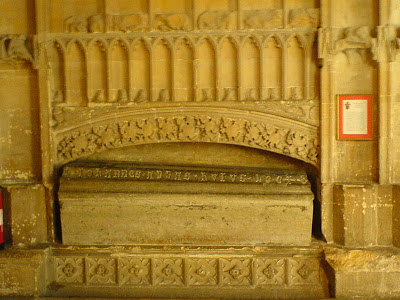 The tomb of Hugh Despenser the younger, now topped with the tomb slab of an abbot of Tewkesbury.

Tewkesbury Abbey has been described as a giant mausoleum for the families of the de Clares and the Despensers. Certainly, the ambulatory is lined with magnificent tombs of Hugh Despenser (the even younger), as well as Thomas and Edward Despenser. However, tucked away at the south end facing out towards the ambulatory is a less grandiose structure. This is the tomb and monument to Hugh Despenser, the younger – king’s favourite, the de facto ruler of England between 1322 and 1326, later to be executed horribly as a traitor. Visitors to the abbey often bypass it in favour of the fancier decorations on the other tombs little realising that this is the last resting place of one of the most powerful lords of England in the Middle Ages.

That he had a tomb at all and that it still exists is a miracle in itself. Before 1330, his quartered remains were still to be found rotting in various cities around the country. If Edward III hadn’t wrested full power from his mother and her lover Mortimer, it is quite possible that they would have remained on show for much, much longer: such was the hatred of the Isabella/Mortimer regime against him. However in December 1330 Hugh’s widow, Eleanor, and several of his friends (unfortunately unnamed) were given permission to collect his remains and give him a Christian burial. 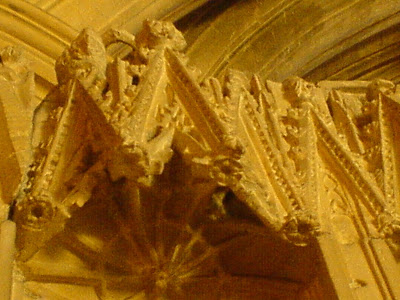 It appears that, during his lifetime, Hugh was a valuable patron to Tewkesbury Abbey (just as his wife and son continued to be after) and it is therefore very probable that he had wanted to be buried there – although, it must be said, most likely after a good long life! The abbot therefore must have felt some kind of loyalty to the Despenser family and had no qualms about allowing a man of his reputation to lie within its holy walls.

Although not as impressive as the later tombs, Hugh’s monument is still far from modest. The tomb is described in Tewkesbury Abbey: History, Art and Architecture (edited by RK Morris and R Shoesmith) thus:

A central arched recess is surmounted by two tiers of niches, and is flanked by pairs of canopied niches in two tiers. Above the depressed arch, decorated with large vine leaves and grapes, and with dragons in the spandrels, are 13 smaller niches, perhaps for statues of Christ and the Apostles. Above them were six more large statues and on the left (western) side of the tomb, are two further small niches. The only positively identifiable one of the large upper figures is a damaged image of St. John the Baptist, discovered in the excavations beneath the high altar in 1875… 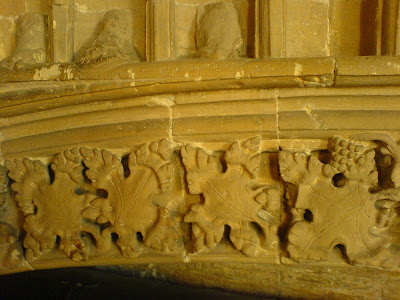 The tomb you see today is not how it would have been. Apart from the obvious damage to the edifice, there is also a strange impostor occupying the position where an effigy would once have rested. Curiously this is the tomb slab of Abbot John Coles (1328-47) – the man who would have seen the interment of Hugh’s remains. When it was placed there and why remains a mystery but when the coffin below was opened in 1795 all that was found were some pieces of gold material decorated with the de Clare arms. This has been supposed to be what was left of some sacerdotal habit – a gift from one of the de Clares – but again, this hasn’t been proved. The black slab now overlying the tomb is simple and sombre; it is made of black Purbeck marble and has an inscription on its edge that reads: ‘Iohannesabbashuuius loci‘.

What became of Hugh’s remains is not known but it is possible that by then they had been reduced to dust (they’d probably been damaged by being out in all weathers for so many years anyway). It is also not known what happened to his slab and effigy but a broken piece of a lion foot rest later became attached to another base (next door) and it has been suggested that this was a part of it (it is from the right date). The base itself seems as if it could be original. It unusually has no heraldic devices but this is in keeping with the circumstances of the time when Hugh had been stripped of his right to bear arms. Teetering on the edge of royal favour/disfavour as they were, the Despenser family would not have wanted to have wanted to rock the boat too much. 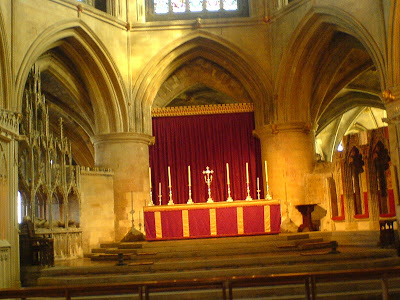 On the other side of the tomb is the sedilia and this is again quite beautiful in its own distinctive style. Back in Medieval times it was thought that the closer you were buried to the altar the more it would help your soul ascend to heaven. In that case Hugh was in the right place – he would have needed all the help he could get after the kind of life he had led. 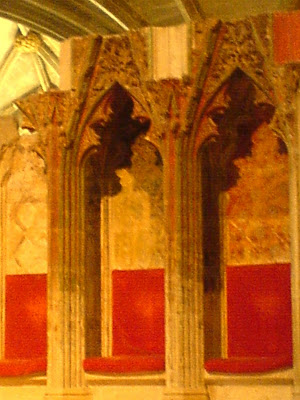 A close up of the sedilia

Eleanor continued to fund the improvements at the abbey which included wonderful stained glass windows containing pictures of her ancestors and, of course both of her husbands: Hugh and William la Zouche. During the dissolution of the monasteries in the 1540s the abbey church itself survived (although not the rest of the domestic buildings of the monastery) thanks to the co-operation of the abbot with Cromwell, as well as the parishioners who used it for their worship and later bought it from the Crown for £483. Thus, where other tombs – such as those of Roger Mortimer and Isabella of France have been lost – those they fought against (Hugh and Edward II) still exist and can be visited. 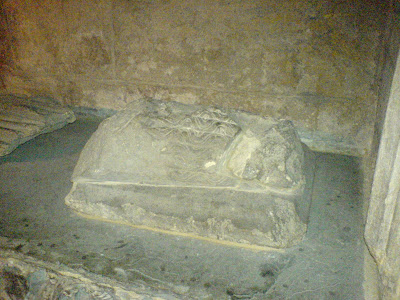 One last irony is that the location of the tomb of Hugh’s wife and the faithful patroness of the abbey, Eleanor, is not known. It seems unthinkable that she would have been buried anywhere but the abbey but there are no records or physical evidence to either confirm or deny it. Maybe someone will someday come up with a yet undiscovered manuscript which will, at last, put in place this last piece of de Clare/Despenser history at the abbey..

7 Responses to Hugh the Younger’s Tomb at Tewkesbury Abbey