Other Household Divisions and Jobs

As mentioned in the last post, the Steward of the Household was responsible for the practical, day to day running of the household. As this was – in the case of the royal household anyway – a huge machine, it had to be kept going both smoothly and efficiently. To this end, the various tasks were divided up into departments, or offices, each with servants to perform the jobs and clerks responsible for overseeing that things were done properly and also for the accounting.

Keeping a tab on expenses was a very serious business, as if any mis-handling or waste was detected, the cost came out of the wages of the person responsible. If the offence was serious, the person would be dismissed – something regarded as shameful. Some of the departments, such as the kitchen, pantry and cellar were larger than others. Smaller offices were more like specialties, and although they had their own responsibilities, these were often performed within the wider scope of a larger department.

Of course, it goes without saying that the royal household had far more staff and also autonomous departments than a smaller noble set-up, but their duties tended to remain the same. Below are most of the household departments, offices and specialties, with their brief(ish) descriptions .

Pantry – Responsible for procuring, storing and preparing the bread to be used for the household. Bread was an incredibly important component of mealtimes and so the pantry was therefore an important office, looked after by an officer called a pantler (or, if there were more than one, the chief pantler).

Two main types of bread were produced or bought by this office: a manchet, or dinner roll made from the best flour, which was used for scooping up or dipping into food. The other was made from coarser flour – usually rye – and was often a few days old. This was for the trencher – a sort of disposable plate. The round loaves would be sliced into thick slices, trimmed and the middle slightly hollowed out.

At a meal, a less distinguished guest would most probably only have one of these trenchers throughout – the bread becoming soggier with each course. Higher-born guests would have their trencher replaced frequently. At the end of the meal, the trenchers would be collected and distributed to the poor – a good example of recycling in the Middle Ages!

Wafery – attached to the pantry, the wafery was where wafers and sweet biscuits were made and stored.

Bakehouse – This is where the bread was baked – and so also was responsible for the buying of flour and making sure it was of the appropriate quality to the price.

Cellar – Responsible for the storage of the wine and beer – and its quality. The cellar usually had overall control of the buttery and pitcherhouse.

Brewhouse – Brewed the beer and some of the wine used in the household (the better wine would have been bought in from specialist producers).

Buttery – was responsible for serving wine and beer at mealtimes. The word has nothing to do with butter – it comes from ‘butt’ – a barrel or cask capable of holding around 100 gallons. In most medieval households, a room called the buttery was situated close to the great hall. This is where all the drinks would be laid out prior to serving.

Spicery – Closely connected with the wardrobe, as detailed in the extract below – the spicery was responsible for the care of expensive household items – not just spices and sugar but also wax, linen (for napery) and cloth. One of its duties was to distribute the items to the appropriate officers and see that they were used as they ought to be (as below).

Item, a clerk of the spicery, chief usher of the wardrobe, who shall receive from the clerk purveyor of the great wardrobe the wax, napery, linen, cloth, canvas, spices, and the other things of all sorts that pertain to his office, [and this] by indenture expressly mentioning price, yardage, weight, and cost. And he shall cause to be weighed the wax which the chandler is to have worked, and shall reweigh it after it has been worked. And he shall oversee and cause to be recorded by his under-clerk the liveries of chandlery made each day in the wardrobe, and on the next day he shall supervise the putting away of the torches, the great candles, and the mortars. Each day he shall record the parcels of all sorts of things delivered and dispensed from his office, as counted since the day before, and he shall answer concerning them at the account of the household. And he shall oversee the carriages belonging to the wardrobe, as well for the coffers and other things of his office as for the beds of the wardrobe clerks which ought to be carried. And he shall make allowance in his roll for the carriage and transportation reasonably used in connection with the king’s journeys….(from Edward II, Household Ordinance 1318)

Chandlery – responsible for the production and storage of candles, made from the wax kept by the spicery. 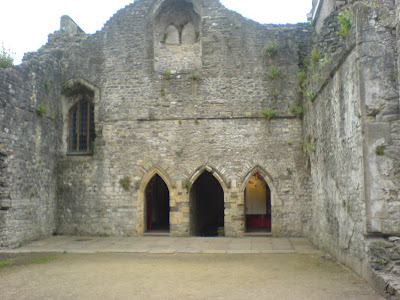 Kitchen – One of the largest departments in the household, it was, of course, responsible for the cooking of meals – both for the king (in the case of the royal household) and the household itself. It therefore had two sets of staff including two cooks each, clerks, yeomen, grooms and pages. Usually the kitchen (along with the scaldinghouse and bakehouse), was situated a distance away from the Great Hall. This was because of the very real risk of it catching fire and the fire then spreading to the residential buildings. It was usually connected to the great hall by a long, covered corridor. Often the corridor opened out into the great hall itself and was flanked by doors leading to the buttery and the pantry (see photo).

Larder – responsible for the procurement and storage of meat and fish (at the instance of the kitchen). Although in the royal household it was separate from the kitchen in terms of administration, it obviously linked itself closely to the kitchen’s operations.

Scullery – the office that looked after the serving dishes, platters and any other dining paraphernalia – washing, polishing, and storing them and of course producing them as and when required. However, this wasn’t the only task meted out to the scullery: it was also charged with the supply of firewood and charcoal for cooking, and looking after the fires themselves.

Poultry – mostly concerned with what were called the ‘white’ meats – those of fowls and lamb. However, it also took charge of the use of butter and eggs. As well as the more common birds, it was also able to buy more exotic varieties, such as songbirds and peacocks if the occasion demanded it. It would have worked closely with the scalding house.

Acatery – the office of procurement of meat, fish and salt. Its clerks, if necessary, would also be in charge of finding extra pasture or storage space if needed. Acatery comes from the French verb achater – to buy.

Confectionary – Not quite a sweet-shop. A ‘specialty’ job concerned with working with sugar and other substances to produce such things as comfits and subtleties.

Saucery – For once, does what it says on the tin. The saucery was the office that made the sauces, and was headed by a saucerer (I’m sure there’s a joke there somewhere!).

Ewery – The ewerer took water to the table – for guests to wash their hands before dinner. He was also responsible for preparing baths, and sometimes drying the king’s clothes if they got wet while out hunting. It was, however, a separate office from the laundry.

Laundry – One of the few offices that had women servants in the royal household. Responsible for the washing, drying and storage of clothes, bed sheets etc. The king had a separate laundry service.

Napery – Responsible for the washing and storage of napery. Closely connected to the wardrobe and also, sometimes, the pantry.

Great households also often had a pastry (guess what that did), a boiling house, an almonry (to make sure that the poor were provided for by the lord and lady), a tallower (for the making of tallow) and a verderer (who looked after the game animals). The job specifications seem to be endless (and I have not even touched on those who served the food in the hall or else acted as ushers and marshals). And they were not always clear-cut either. Some departments seemed to merge or overlap in their responsibilities, while their sphere of influence often changed from location to location or from time to time.. Even so, the things that had to be done to ensure the business of the house was carried out competently and cost-effectively stayed constant for hundreds of years.

6 Responses to Other Household Divisions and Jobs