After being knighted it seems that Roger really started to take his role as a knight pretty seriously (although I’m sure it wasn’t down to any great personality change – just better opportunities). He joined the king in his Scottish campaign of 1306, after Robert the Bruce had seized the Scottish throne in March of that year. The army, under the command of Edward, Prince of Caernarvon, had set off almost immediately after the Feast of the Swan – maybe even the day after Hugh Despenser’s wedding to Eleanor de Clare (I think we can assume that Hugh didn’t have much time with his new bride). By autumn, the campaign had proved largely successful, although Bruce had disappeared into the fastnesses of the lochs and mountains to lick his wounds. Full of their victory, a number of the young knights – including Roger, decided to desert the southward bound army in order to journey overseas to take part in a tourney. The king was so furious at this disobedience that he had their lands declared forfeit. However, thanks to the intercession of his queen, this was soon overturned and by the time of the Carlisle parliament at the end of the year, all seemed to be forgiven.

In 1308 Roger decided to go to Ireland, to stamp his authority on the estates he’d come into through his wife. At this time Ireland was a particularly unruly place with clan fighting clan, Norman-Irish lord fighting clan and Norman Irish lords fighting each other. As some native Irish laws forbade any inheritance through women, and Roger’s lands in Ireland had come to him through his wife and grandmother, he must have felt particularly threatened by a rising sentiment of Irish nationalism. During his first trip to Ireland it seems that he worked with Gaveston (who had been sent there as Lieutenant of Ireland by Edward during his first exile) to quell rebellious factions – something which they achieved with great success.

His second visit was in 1310, leaving an England that was once again in turmoil over the barons’ frustration about Edward’s favouritism of Gaveston – to their disadvantage. It seems that Roger deliberately stayed out of the arguments – and did not even answer Edward’s summons for a new (and, as it turned out, unsuccessful) Scottish campaign. Roger remained in Meath for the next couple of years, consolidating his estates and putting down a rebellion by the de Verdon brothers. With the shock death of Gaveston in 1312, Roger returned to England, both out of loyalty to Edward and his kinsman the Earl of Pembroke, and also to help his uncle defend his Welsh estates against the Earl of Lancaster who now had a feud with him.

Not much is known of what Roger did around this time although there is a suggestion that he travelled to Gascony, possibly to deal with a conflict between his wife’s kinsman Amanieu d’Albret and John de Ferrers, the English Seneschal, or maybe on other business for Edward. In any case he was back by June 1314 as he took part in the catastrophic (for the English anyway) Battle of Bannockburn. It is most likely that he fought with Edward’s bodyguard and formed a defensive rearguard as Edward fled. He was lucky not to be among the casualties of the day, but was captured by Bruce’s men and taken to their king. Mortimer was Bruce’s third cousin, as was Gilbert de Clare, earl of Gloucester who was slain on the field. The Bruce magnanimously released Roger without claming a ransom (possibly because of his kinship) and sent him back to England as an escort to the Earl of Gloucester’s body, and Edward’s privy seal and royal shield, both of which had been lost on the battlefield. Although he could count himself lucky to be both alive and free, Roger must also have felt great shame at arriving back at court as the bearer of the reminders of the great English defeat. 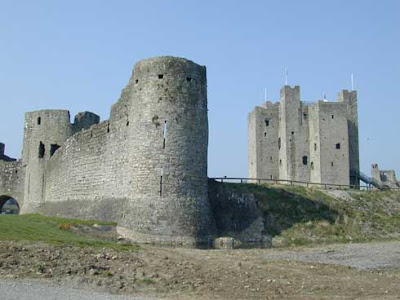 Not long after, followed another defeat – this time a personal one. Early in 1315, Roger received information through his informers that Edward and Robert Bruce were planning the invasion of Ireland. Roger left immediately to defend his lands – just as Edward Bruce was sweeping through Connacht. Robert’s brother soon gained a reputation for ruthlessness, particularly after a bloody massacre at Dundalk. This time, however, the English resistance seemed to lack the cohesive quality it had under Gaveston and Roger suffered a humiliating defeat at the Battle of Kells. His army was destroyed by Bruce’s men thanks to the treachery of two of Mortimer’s retainers – Hugh and Walter de Lacy; Roger himself only just escaped with his life, fleeing to Dublin and from there back to England. Ireland was now on the verge of being ruled by Scotland.

Back in England, Roger must have fretted to be allowed to return to Ireland and fight the Scots but for the time being he was required on English business. His experience in the field was called upon twice – to put down the rebellion of Llewellyn Bren in Wales and to subdue another rebellion of Bristol merchants. Both tasks were carried out successfully.

Meanwhile in Ireland, Edward the Bruce and his army were wreaking terrible destruction throughout the land, plundering and burning whole areas and committing the population – already suffering from the great famine of that time – to appalling suffering. The English justiciar and other Anglo-Norman lords tried their best to fight back but were defeated time and again. It looked as though, with Edward Bruce crowning himself King of Ireland in January 1316, that Ireland was a lost cause. Roger had proved himself to be a capable strategist and brave commander in the field and it was to him that Edward II turned in desperation. On 23rd November 1316, Roger was made the King’s Lieutenant of Ireland and sent to fight the Scots with a royal army and funding from the Crown.

He spent the next few months planning his campaign and garnering support and intelligence sources. The logistics of moving such a large number of men, horses and supplies over the Irish Sea was mind-boggling and gradually time began to slip away as the preparations took on monstrous dimensions. In Ireland meanwhile, taking advantage of these almost farcical events, Edward Bruce had now been joined by his brother Robert to ensure that the Irish would stand firm against any new invasion from England. From the previous attempts to oust them it looked as if they had little to fear anyway.

In April 1317, Roger’s army finally made landfall on the Irish coast at Youghal. It was an impressive host and looked as if it meant business – certainly not the bedraggled men that the Bruces seemed to have been expecting. To make matters worse for them, the native Irish, tired of the Scottish oppression and brutality, welcomed the English attackers, swelling their ranks with their own conscripts. Seeing the tide suddenly turning against them, and with their own men tired and hungry, the Bruces were forced to flee north, into Ulster. Roger did not follow them immediately, but set about restoring order in the south and winning the hearts and minds of its people. He also took the opportunity for a bit of revenge against those who had betrayed him previously – especially the de Lacy clan who he roundly defeated in a battle in early June. Hugh and Walter de Lacy were not killed but were forced to flee to Scotland as outlaws and felons. Their property was confiscated.

Roger now seemed to rule in southern Ireland like a king, making grants of land to his loyal retainers and performing knighting ceremonies (one of those knighted was his young son, John, who was probably only about nine or ten at the time). His authority was complete and he continued to lead his army against pockets of resistance, successfully quelling them all. From England, Edward issued a series of orders that at times undermined his lieutenant’s command. It was almost as if Edward sensed that Mortimer was getting above himself and was trying to reign him in and show him who was really boss. But Roger continued to practically do whatever he wished – although he was careful not to rile Edward too much. Even so, this is probably the first glimpse we see of a power struggle between the two – one that was to soon escalate out of all proportion in the coming years.

There was only one victory left for Roger to achieve – the final push against the Scots in the north. However, before he could start serious preparations for his campaign, he was summoned back to England, his role as Lieutenant at an end: Edward wanted him where he could control him. We will never know how Roger felt at his command being taken from him but he must have felt rage, and a sense of betrayal at not being allowed to finish what he had started. In one last act of revenge against the family who had acted so treacherously against him, he summoned John de Lacy (an illegitimate son of either Hugh or Walter) to him at Trim Castle. De Lacy had been captured and previously imprisoned at Dublin – but this was not enough for Mortimer. De Lacy’s family had abandoned him on the field at Kells and later, had murdered an emissary and one of Roger’s friends in a shocking act of cold-blooded thuggery. The man now before Roger was to pay the price – and was sentenced to be imprisoned at Trim – and starved to death. The order given, Roger sailed for England in early May 1318 to find that, at court, everything had changed and there was a new favourite pulling the strings of power: his old enemy Hugh Despenser the younger.