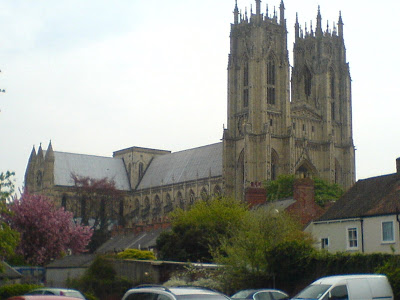 A couple of months ago I went on a slightly unscheduled tour of the area around York. One of the places I visited was Beverley Minster – a beautiful cathedral-like building in what is now a small and out of the way town. But Beverley used to have far more importance in medieval times – it was a place of great religious importance and it was also an important trading town for the region’s prosperous wool trade. All of this made Beverley the 10th largest town in England by 1370. 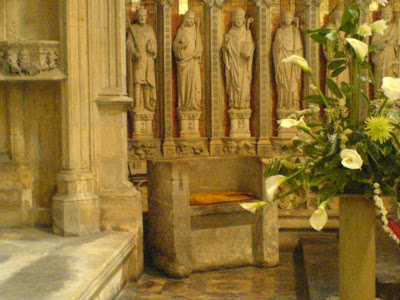 The town was founded in the 7th century by John, the Bishop of York – later known as John of Beverley. He was later canonised to become Saint John of Beverley and many miracles were attributed to him thus promoting the church as a lucrative place of pilgrimage. The incoming wealth enabled a much grander church to be built and the current structure, most of which dates from about 1220, is considered to be the most architecturally impressive religious building in Britain that is not a cathedral. 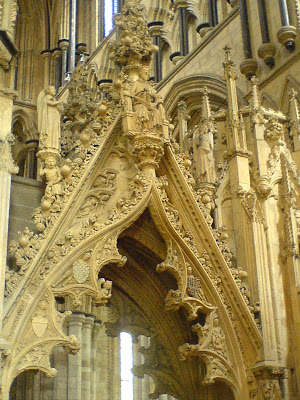 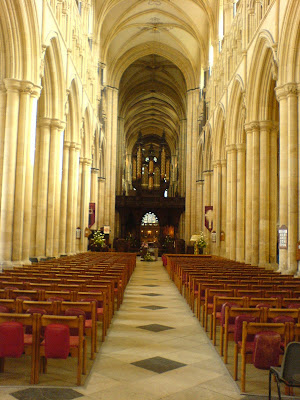 St John, whose bones still lie under the floor in the nave, was also an important saint for the several kings of England. A Banner of St John, kept at Beverley, was supposed to aid the English in their battles against the Scots; Edward I, Edward II, Edward III and Henry IV all stopped off at the minster to pay their respects and collect the banner to take with them in their campaigns – with very mixed results! Obviously it didn’t do Edward II much good – but Henry V credited his victory at Agincourt to the saint’s intervention. Edward I was a great devotee of the saint (small surprise given his Scottish ambitions). Other famous followers were Julian of Norwich and St John
Fisher (martyred by Henry VIII in 1535).

Top: A view of Beverley Minster

Second: The Frith Stool – Anglo-Saxon in origin, it is connected to the Minister’s rights of Sanctuary.

Third: The beautiful canopy of the Percy Tomb (either Eleanor or Idonea Percy 14th C)

Fourth: The nave looking towards the quire.