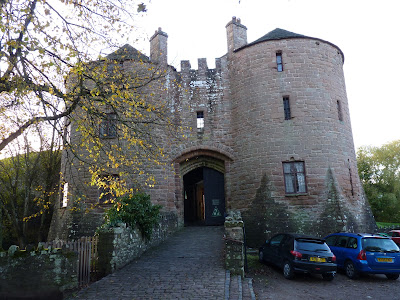 Last weekend I had the privilege of staying the night at St Briavels: a medieval castle – and a reputedly very haunted one at that! It was not only fantastic to spend the night within its ancient walls, but it was also an excellent opportunity to photograph some of the rooms that aren’t open to the public due to it being a youth hostel.

The castle is located in the small village of St Briavels in Forest of Dean in Gloucestershire, just south of Coleford and north of Lydney! Whether it existed on the site or in what form during and just after the Norman conquest is a matter of debate, but what is known is that it was first recorded as a royal castle in 1130. The constable at that time was Miles de Gloucester, the hereditary sheriff of Gloucestershire and later to become the earl of Hereford. He declared for the Empress Matilda during the conflict between her and king Stephen and was rewarded in 1139 when she granted him the castle and the Forest of  Dean with it in fee. During the reign of Henry II, because of a rebellion by Miles’s son, Roger, the castle and forest reverted to the crown and stayed royal property for the next 200 years or so. The castle became the centre of forest administration, with its constable also being titled Warden of the Forest.

The castle, which seems small and rather insignificant today compared with its neighbours at Goodrich, Chepstow and Caerphilly, was an important asset to the crown not only as a headquarters for the constable but also as a court, a prison and the centre of the production of crossbow quarrels. The forest has rich iron reserves and it is thought that there was a forge at the castle as early as 1141. However, it was not until the thirteenth and early fourteenth century that this industry reached its apotheosis. One of the smiths sent there by Henry III in 1228 was John de Malemort, along with his brother William. Together they were responsible for the production and storage of armaments for many years. In 1265, it is thought that as many as 25, 000 bolt were being made there a year.

But the castle was not just all about administration and industry; it also provided a good base for royal hunts. John was especially fond of it and visited at least five times during his reign (as well as spending much money on building works). It was just as popular with his son, Henry III and Edward II also visited between the dates of 2nd to the 6th of April 1321 during the Despenser war. Constables of the castle during the early fourteenth century (see below) included both loyal royal servants and favourites: Edward made Roger Damory constable of St Briavels in 1318 and Hugh Despenser the younger took superior custody between 1322 and 1325 (it was Robert de Sapy, the appointed constable on the ground who actually got things done!).

The sad remains of the keep

The architecture of the castle is rather confused, due to its long period of use and much unsympathetic rebuilding done in modern times. The first structure on the site, the stone keep is now all but disappeared, having collapsed in the 18th century and the rest being demolished. All that remains today are a few pieces of toppled wall.

During the early 13th century, a stone curtain wall was built, replacing the wooden palisade and a moat was added outside. In fact a great deal of money was spent during the years 1209-11 by king John: as well as the wall the works also included a two story domestic range on the western side that served as royal apartments (on the second floor), including a great hall, a possible solar connected to, on the ground floor, the kitchen. During Henry III’s reign a chapel block was added to the domestic block at right-angles adjoining the solar and great hall. This was also two-storeyed.

The next development in the castle’s history was during 1292-3 when Edward I ordered a gatehouse to be built at the northern end. It took the form of many others built during that reign: two towers which extended from the curtain wall and flanked the gate.

The western tower incorporates what is now known as the ‘Porter’s Lodge’. On the second floor are rooms used as a prison during the 17th century. Graffiti from the prisoner’s held there can still be seen on the wall, including windmills drawn by some Dutchmen held there.

Above the prison is the ‘Hanging Room’, a horribly oppressive place, although I cannot find any firm evidence that anyone was actually hung there. Names are often passed down through time though, so it cannot be ruled out.

Outside there are clues to other buildings. There are traces of another tower in the south-eastern corner and along the east curtain wall there is a large hearth place. It is similar to some I have seen in kitchen areas of castles, but I have also seen claims that it was part of another great hall (unlikely) or that it was part of the castle forge.

What is known about that range of now-long-gone buildings though, is that it had a tall chimney, with a cap in the shape of a forester’s horn. During the late 18th/early 19th century, this was taken down and moved over to the west buildings, where it remains today.

A corridor in the castle today

Since the middle ages the castle has been, at various times, a debtor’s prison, a school, a private residence and, currently, a youth hostel. This has meant that there have been many changes internally that have not been at all sympathetic, the main culprits in my eyes being the brown shiny paint and the red fire doors. But despite this, the place maintains a feeling of grim authority and it is easy to see why it has a reputation for being very haunted. Indeed, I can say that during my stay there many things happened for which I could not find a reasonable, logical explanation.

As another note of interest concerning the Despenser family, Hugh the younger’s great-grandson Thomas le Despenser, earl of Gloucester, held the castle from 1397-1399.

6 Responses to St Briavels Castle: From Hunting Lodge to Hostel