On Finding Strange Skeletons From the Past: Richard III 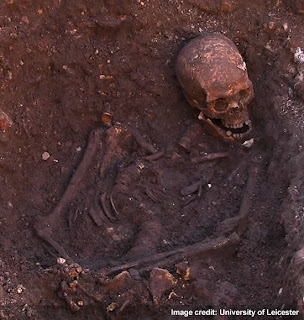 The skeleton of Richard III, found in a car park.

Now that the excitement from yesterday’s announcement of the finding of Richard III’s body has abated a little, I thought it only right to do a little post.

I looked at all of the evidence, which, although it could be considered circumstantial by harder-nosed academics, was certainly enough to convince me on the balance of probability alone that the skeleton found in the car park was indeed England’s lost king. I must admit, when the find was first announced I thought it very unlikely that the bones found would turn out to be anything other than either an abbot or  maybe even a patron from another time period. I thought that maybe Leicester university were pulling off a very clever piece of PR maybe to gain more funds for the project or at the very least, recognition for the institution.

As such, I refused to let myself get too excited – I’ve watched far too many series of Time Team to know how such digs can end up being ultimately disappointing after promising so much. Nevertheless, as I prepared to watch the announcement yesterday, I found myself sitting on the edge of my seat. Little clues had appeared in the press over the recent days as to the result being positive – but even so, I needed to hear those words confirming it to be so. And when I did, I must admit that I cried – even though I am no Ricardian, and that my period of study is not the Wars of the Roses. There were no two ways about it though – it was an emotional event.

Of course there has been criticism about the way the DNA was used (by all accounts mitochondrial DNA can often lead to mistakes being made, as in the case of Cheddar man) – but all in all it would seem churlish to dismiss the findings when so many other details correlate with historical record. There was also alot of criticism from some quarters about the program on Channel 4 which showed the whole thing from the car park being dug up to the final analysis.

But all this hoo-ha takes me back a few years to the discovery of another medieval skeleton, this one at Hulton Abbey. The archaeologist in charge excitedly claimed that she thought it was the remains of Hugh Despenser, a claim which, for many reasons, I argued against (see this article). The ‘evidence’ in this case was the weakest of circumstantial facts (approximate age, period of death and injuries that may have been indicative of being hung, drawn and quartered) and yet ignored the historical record that Hugh’s remains had definitely been buried at Tewkesbury abbey, that Hulton Abbey had absolutely nothing to do with him or his supporters – or that many men suffered the same fate during that period. Nevertheless, it still made headlines. And, to be honest, I wasn’t that worried. Hugh Despenser had some great publicity from the find, as did my blog and, I suppose the archaeologist and her institution got some good press too. So, a win, win (although I would never have let the issue go without disputing it!)*

So who do we dig up next? What historical mysteries can science solve now? The Princes in the Tower perhaps? Or whether it really is Edward II buried in Gloucester Cathedral, and not some stand in while he escaped to live in peace in Italy. Now we have Plantagenet DNA, both would be possible. But even if we proved the skeletons found at the tower were those of the princes (that is, i the DNA in the bones is still viable), we still would not be able to solve the problem of their fate. As to Edward II, would it really be worth it to desecrate his tomb just to satisfy our curiosity? Science has started to open up the world of archaeology and history – and I have long advocated a multi-disciplinary approach to looking at the past – but I also think we must take care not to push too many boundaries just to satisfy our need to know. The dead still deserve respect, no matter how long they’ve been dead: at least Richard’s body will now be found a more suitable resting place than underneath a social services car park.

*As I write, I have just come across the publicised journal account of this find with all of the sources for her speculation that I was previously missing. Therefore, to be fair, I need to go over it again now to see if she can still convince me that Hugh has been found too. Watch this space!

3 Responses to On Finding Strange Skeletons From the Past: Richard III